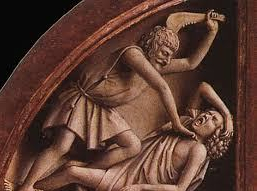 El Paso, Texas.  Dayton, Ohio.  Gilroy, California.  Oh, have you already forgotten Gilroy, California?  It was only a week between the Ohio and Texas shootings and Gilroy, but we are in another news cycle, are we not?  How soon will Dayton and El Paso fade from our memories?

Listing to the news in regard to the recent mass shootings brought me back to the garden.  Adam blames God.  “The woman whom you put here with me…”  Eve blames the serpent.  “The snake tricked me…”   We humans haven’t changed much since the garden, have we.  We begin blaming as children when we are caught doing something we shouldn’t be doing.  We blame our siblings, the bogeyman, the shrug of shoulders with an, “I don’t know”.

Like Adam and Eve, our society is shamed before the world in being found naked, impotent, in the face of such repeated violence and lack of any responsible response.  And like Adam and Eve, society blames.  We blame hate speech to mental illness; illegal immigrants to video games; government ineffectiveness to white supremacy; Neo – Nazi websites to…what or whom do you blame?

Blame removes us from any responsibility.  The shouts to elected officials, “Do something!” reveals our self – absolution from culpability.  The reasons for such violence in our society are complex.  Our feelings of helplessness and our ineffectiveness to address this scourge reveals a deep seated spiritual emptiness and lack of courage.  Yet I have to wonder if this is because we have not as yet named the root cause. 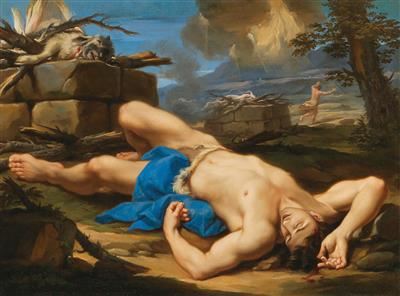 Is it not telling that the biblical story of salvation begins with an act of violence, the murder of Abel by his brother Cain?  Then the LORD asked Cain, Where is your brother Abel? Cain answered, “I do not know. Am I my brother’s keeper?” [Genesis 4:9]

“Am I my brother’s keeper?”  The question is the declaration of Cain’s lack of culpability in the face of violence.  It is his admission of guilt.  None of us can wash our hands of our responsibility for each other.  We are our sister’s and brother’s keeper!  But in living out our extreme sense of privacy and individualism, have we not abdicated that responsibility?

How often do we hear, after the fact, that someone in high school, in the neighborhood, in the family saw signs of that ‘red flag’ that a person was going down the wrong path toward hate and violence but said nothing.  “Am I my brother’s keeper?”

The biblical story of salvation also ends in an act of violence, the crucifixion of Jesus and two other individuals.  The issue is not about their guilt or innocence.  The issue is about violence.

I expect we do not even recall that the crucifixion was preceded by an act of violence by Jesus’ disciples.  In the garden of Gethsemane, all four Gospels record that the disciples had swords and were prepared to use them.  And they did.  “Jesus’ disciples realized what was about to happen, and they asked, “Lord, shall we strike with a sword?”  And one of them struck the high priest’s servant and cut off his right ear” [Luke 22:49-50].  Rooted in fear, the violence of the disciples harmed an innocent bystander, a servant.  Today in our country, fear is harming Afro – Americans, Latinos, immigrants and refugees.

And Jesus’ response to this act of fear and violence in his supposed defense?

Luke records, “Jesus said in reply, “Stop, no more of this!” [Luke 22:51]    Matthew records, “Jesus said to his disciple, “Put your sword back into its sheath, for all who take the sword will perish by the sword”” [Matthew 26:53].  Luke records that Jesus healed the servant’s ear.  In the midst of his arrest, Jesus remained faithful to his mission.  Are we faithful to Jesus and his mission?  After living and listening to Jesus’ teaching for years why did the disciples have swords?   Why do they never seem to understand Jesus’ stance on much of anything, including violence?  Why don’t we who claim to be his contemporary followers? 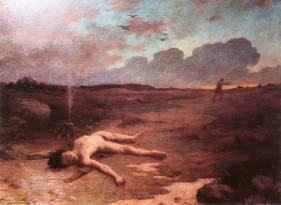 We need to ask ourselves, why are we such a violent people?  Why have we not been able to respond to these mass shootings with anything but blame?  We are the most armed nation in the world, arguably the most violent from our entertainment to our streets.  We have the largest population of incarcerated people in the world.  And our nation is unique in this kind of mass shootings among the nations.

This most give us pause to reflect on this problem of violence within the human situation.

Is it because our national story began in violence, a revolution?  Do we ever call to mind the violence we inflicted on the indigenous peoples of this continent?  Some would call it by its contemporary name, genocide.  Is there good reason that we called the West, “wild”; not because it was a vast open expanse but because it was violent?  One hundred – fifty years ago Cain and Abel again fought as brother fought brother in the civil war.  That war has not ended but continues in the arguments over the display of the Confederate flag and statues of the Confederacy’s leaders. We still have not adequately dealt with the violence of purchasing, shipping and selling black human beings; the beatings, the teaching apart of families, and the lynchings.  And the violence we inflict on every new wave of immigrants.  “Irish need not apply” has appeared in many versions.

A final aspect we need to reflect on is that, to my memory, all of these acts of mass shootings and bombings have all been carried out by young men.  Why is that?  Why are many of our males filled with such anger, aggression and hostility toward other people?  What are the images we are offering to young men of masculinity, of what is means to be a man in this changing world?  How are we forming our boys?  What messages are we giving them?   Anger is a form of violence. Our silence is also.

We are not a theocracy like the ancient Kingdom of Israel, we are a nation of many religions, belief systems and no belief.  What is our response to human violence as Christians?   It seems to be our existential curse since Cain.  These continued acts of mass violence against the innocent and our inability to respond must give us pause to reflect.  If we do not stop this, ours will be the cry of Cain, “My punishment is too great to bear” [Genesis 4:13] and we shall become restless spiritual wanderers on the earth.  This reflection must begin with ourselves.  “Am I my brother’s keeper?”  A question that arises from the mists of a primordial history yet how contemporary it is.

How much longer can we go on this way without our souls being torn from us?

Or has that already happened to us?