█ Six months after Hurricane Maria, parts of Puerto Rico are still without water and electricity.  People have committed suicide due to the hopelessness.  █ People suffering from mental illness and those who are homeless aimlessly walk the streets of Oneonta.  █ Syrian families, particularly children, continue to be devoured by the jaws of war.  Those who escape the violence are met with walls of fear, judgement, paperwork and resistance from the Western nations.  █ Women continued to be treated as objects for the sole pleasure of men.  █ Unemployment, inadequate education, hopelessness and irresponsible hate speech stoke the fires of fear within many people resulting in anti-Semitism, intolerance and racism birthing violence in the name of tribalism.  █ Nursing homes are filled with people who are just existing.  Waiting for death that never seems to arrive.  █ The rise in internet pornography use may only be a symptom, but a symptom of what?  What are people really looking, missing, for in their lives?  █ Physical, emotional and sexual abuse mar family life, often behind closed doors.  The pain of not being believed.  █ People are dying every day from opioid overdose crisis, gun violence, famine, loneliness.  █ In the twenty-first century who would think that human beings would be sold as slaves and families torn apart?  █ The inner suffering of the bully; the outer suffering of the person bullied.  █ The erosion of trust at all levels and in all institutions of society.  █  The personal and familial brokenness and suffering of divorce, family members suffering from various forms of disease, adultery, spiritual crises or the rejection of religion and faith altogether, abuse, the inability to make ends meet, the relinquishing of the “American Dream”, addictions.

What does it mean to be a Christian in a suffering world?

“A woman came with an alabaster jar of perfumed oil.  She broke open the jar and poured the oil on Jesus’ head.”

Oil soothes and heals.  Olive oil, petroleum jelly, sun screen, lip balm, aloe vera…  I wonder what suffering this anonymous woman saw in Jesus that needed to be healed.   Whatever she perceived in Jesus may not be as important as that she saw a person suffering and she attended to them.  She – can we call her Veronica after another woman who saw suffering and had the compassion and courage to address it?

Namelessness is itself a quiet form of suffering, is it not?  You are a non – person. 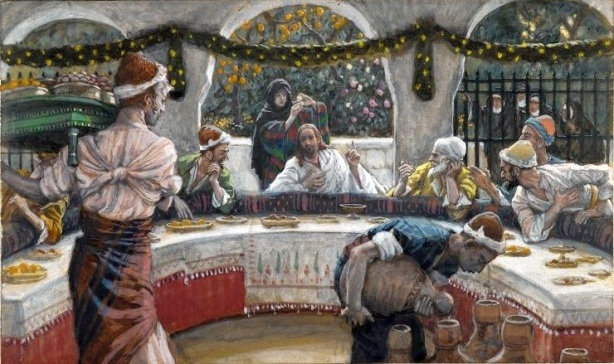 Might Veronica offer us an answer to my question about a Christian’s response to a suffering world?

Veronica draws no attention to herself but quietly slips into Simon’s home, uninvited I presume?  This entrance of a non – person is marked by silence.  She says not a word.  Veronica slips in and acts to alleviate a person’s suffering.  The response to her care in anointing Jesus is rather unexpected: indignation, anger and a false sense of righteousness.  Did anyone at table really care about the poor?  There is a blindness among the dinner guests that is at the root of sin.  The inability to see goodness, name it and encourage it with gratitude.  In their anger, Veronica departs as quietly as she entered.

Veronica’s action is marked by four characteristics of the Christian.  Unobtrusiveness.  She slips in to Simon’s home so as not to be noticed.  Silence.  Drawing attention to her action and away from herself.  Courage.  Just like her namesake Veronica, these two women break social norms, confronting those in power and position, so as to heal.  And finally, Condemnation.  As Jesus taught, “If they persecuted me, they will also persecute you.”   [John 15:20]

What does it mean to be a Christian in a suffering world?

Might aspects of Christianity, and therefore of the individual Christian, go back to our roots; forsaking power, even the semblance of power, and be living examples of what we profess and believe in Jesus.  Two millennia ago that is what made the difference by a small band of Jewish women and men in a large violent empire.  Instead of getting involved in the shouting matches of the culture wars of our society or the theological and liturgical wars within our church, maybe we need to quietly submerge ourselves, like Veronica, in the suffering of each other’s lives and in the life of the stranger,.  Many of you quietly do that.  It can and does make a difference; alleviating suffering and offering healing one by one.