Would you ever consider telling someone: “I take pride in the sexual abuse scandal and cover-up that has occurred in the Catholic Church”? I expect not. Just the thought of the scandal continues to raise strong feelings of anger, shame, and confusion within people. The feelings are so intense that some of our sisters and brothers have left the Catholic Church. Can you hold on to those feelings for a moment? 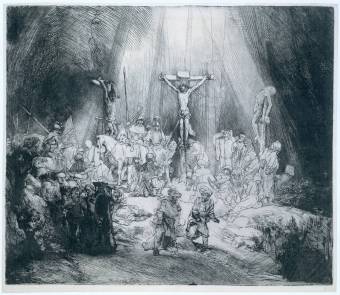 The same feelings of disgust, shame and anger that we feel in regard to the sexual scandal in the Church should rise up in us when we hear this declaration of Paul. “May I never boast except in the cross of our Lord Jesus Christ…” Why do I say that? Because that is how people, Jew and Gentile alike, would have reacted when they first read and heard these words.

Across the centuries we have domesticated the cross to such an extent we no longer experience its horror and revulsion; a mockery of life. For many people, horror is simply another Freddie Krueger slasher film. Have we lost the ability to be truly scandalized; that is, having a stumbling block put in our way? Have you ever experienced our Christian faith as a stumbling block? We have taken the cross and made jewelry, something pretty, out of it. We use the cross as a talisman to get a sports goal while Renaissance, Baroque and commercial artists have created pieces of sensual or sentimental art draining the cross of any real meaning. Like the wild wolf we have domesticated the Cross to a lap dog, non-threatening or challenging. The cross sits comfortably on our walls, our breasts – our lap.

Photography speaks directly and poignantly to our generation and so I might invite you to Google Search: crucifixion + ISIS + Syria, then, click Images. There is revealed a depth of meaning: the cross as ultimate defeat. That doesn’t rub very well against any national psyche or personal righteousness that prides itself on greatness, on winning, on being #1. Jesus died a humiliating and excruciating death. He was a convicted felon. His innocence or guilt is irrelevant.

So, what is Paul trying to express when he writes: “I take pride in the humiliating death and defeat of God as seen in the cross of our Lord Jesus Christ…” Does he not need a good PR person? But Paul is not looking to gain a following or win an election but to proclaim truth.

The truth is revealed in the prayers of the liturgy: “…by the wondrous power of the Cross your judgement [on this world, O God] is now revealed and the authority of Christ crucified.” [Preface I of the Passion of the Lord]

[The death of your holy martyrs] reveals your power shining through our human weakness. You choose the weak and make them strong in bearing witness to you…” [Preface I for Holy Martyrs

Here power is revealed as oppression, weakness as strength, authority as service, suffering shared and borne by God. The cross is a judgment on our world. For a world where the cross is central is a world that has been turned upside down. The world of the cross is a graced world of hope devoid of power and the violence needed to gain and keep power. We can speak of the weakness of God; to most people Jesus is a fool.

Consider the world we have created in relation to the world of God. The vicious and rancorous political climate in our nation; Brexit and the possible disintegration of the EU and Great Britain; deep concerns surrounding globalization, trade and employment; the rise of nativism and anti-Semitism within many nations; a soured Arab Spring; the wars of Syria and Iraq; the incidents of rape and violence against women on our college campuses; the rise of ISIS; the innocent refugees of war and violence drowning in the Mediterranean Sea; the inability to have intelligent discourse between people of various viewpoints – the issues of abortion, gun control, and climate change, suffice as examples; the lack of a common set of values; corporate greed – how much money is enough money?!; the deaf ear the nations to the plight of persecuted peoples; the rise of gun violence in our nation to the terrorism of the lone wolf; environmental issues, conservation and climate change; the seeming resurgence of the Soviet Union as Poland and the Baltic States look to re-arm themselves on eastern borders; Orlando, Paris, San Bernardino, Brussels – Istanbul. Fear.

Whose world is upside down? God’s or ours?

It is this world of sin and division that crucified Jesus and our world lays under the judgment of his Cross and death. Thus Paul rejects the ritual act of circumcision: “For neither does circumcision mean anything, nor does uncircumcision…” Circumcision may have symbolized membership in the People of God but it also separated; separated Jews from Gentiles and men from women. The Cross of Christ reorders priorities. Like the reordered priority of freedom I spoke about last week: freedom rather than license; freedom, not for autonomy and self-interest but for commitment and involvement in the common good; freedom to serve.

Thus the Cross puts the Christian in opposition to the world we have created. The Cross is not about power and violence or success. Nor is it about separating and wall building. Separating gay from straight, immigrant from native born, white from the myriad shades of brown the vast majority of people are in the world, the self-righteous Christian from the Muslim, the Jew from the rest of the world, the…

The cross marks the disciple, who more than not will be seen and treated as a simpleton and fool.  Yet like Paul, our fidelity is to truth, God’s truth.

I mentioned in the beginning of this homily that the feelings of some of our sisters and brothers in regard to the sexual abuse scandal are so deep that they have left the Catholic Church. Might today’s thoughts on the Cross, a chaotic yet graced world and the foolishness of God be summed up in the question, why have you stayed?