Did you ever consider that Jesus is interested in what you and I think. 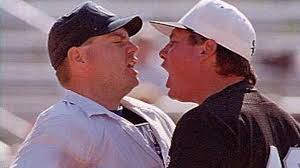 Why do we argue and quarrel? A good fight and shouting match might make us feel better but does it ever really accomplish anything but bad feelings and divisions among us?

Reflect how fast the topics of abortion, welfare, gun control and immigration get heated; how the conversation quickly deteriorates into shouting, name calling and labeling as people back into their corners of truth. To what end? Both parties dig in their heels and close themselves off to other possibilities. Blind and deaf we part from each other.

Consider what is at the basis of all arguing? Is it not about fear and power? Who has power. Who wants power. Who fears losing power. Where there is a grasp or perceived grasp for power there is also a loss or sense of loss of power. What was behind Putin’s occupation of Crimea? Why did we go to war in Iraq and Afghanistan? Why is the world literally building walls: between Mexico and the US; between Israel and Palestinians; between Europe and Middle Eastern refugees. Notice the repetition of the word “between”. Fear and power separate us. It is all about the inordinate fear of losing something and the excessive and often unwarranted desire for power that leads to arguing, conflicts and war.

Let’s come a bit closer to home… what do you and I argue about in life?

This is all summed up in the question posed in the Letter of James: “Where do the wars and where do the conflicts among you come from?” Let’s not talk of the wars between countries but what about the wars and conflicts in our families, between coworkers at our places of employment, in our parish. What is the latest conflict in these areas of life that you are now engaged?

What about the wars within ourselves? Our obsessions, our desires, and lusts. Do we not argue within ourselves? Try and convince ourselves that our intentions have value while we continue our sinful and narrow ways. Isn’t that what is happening in the Book of Wisdom? We don’t exactly know who the wicked are but we do know they feel attacked, they have blinded themselves to truth, they are like a wild animal caught in a corner lashing out as they consciously plot torture against another person and make excuses for themselves. Torture. It is a medieval sounding word that we thought was relegated to the past and yet it has come back into our contemporary experience and vocabulary. How often does torture today take the form of cyber bullying, belittling people on Facebook, and there is always the time honored gossip and slander over coffee? The death of a person’s reputation can be more destructive than physical death, can it not?

What are the power struggles that lead to arguing and conflicts that you are now engaged in?  How readily would we express it to Jesus?